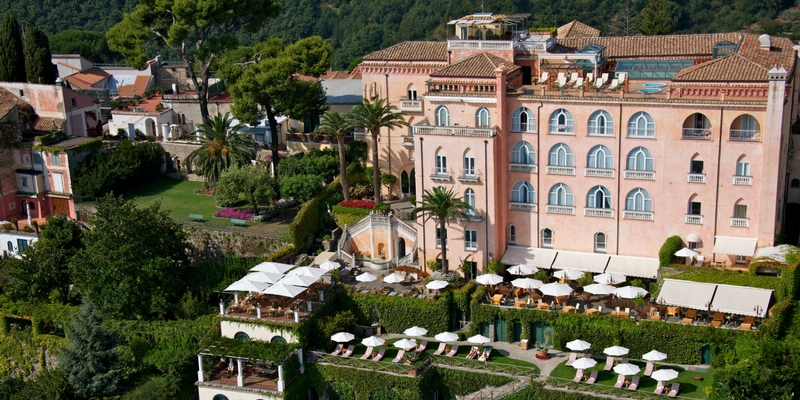 10 May The History of Palazzo Avino

The building owes its name to the prosperous Sasso family from Scala, who were descendants of San Romoaldo, founder of the Cistercian order, and San Dominico Sasso, the successor to Saint Dominico who created the Dominican order. The Sasso family settled in Ravello in about 1710 when Domenico Diego purchased the remains of the Palazzo Sasso from the noble Bonito family and subsequently restored it. In 1756, his son, Andrea, built the chapel, dedicated to Maria Maddalena Penitente, which is now the lobby of the hotel. Andrea died in 1758 without an heir.

The Palazzo was then abandoned until the beginning of the 19th century when it was purchased by a rich industrial Camera family. In the mid-19th century, the first foreign visitors began to arrive, such as Francis Nevil Reid in 1851 and Richard Wagner. When James Becket bought and rebuilt Villa Cimbrone in 1904, Ravello attracted many prominent people, including Virginia Woolf, E.M. Forster, Maynard Keynes, D.H. Lawrence and Andre Gide. The potential for tourism was not lost on the Camera family who, following the example of other local families, converted the Palazzo into a hotel.

In 1928 the Vuilleumier family assumed the management of the hotel. During the next half-century, Palazzo Sasso was known as Hotel Palumbo and its guests included Kings, Queens, aristocrats, poets and writers. On the declaration of war against France (in 1939), the French-born Duchess Anna of Aosta (wife of the Viceroy of Ethiopia) was applauded by the people of Ravello when she appeared on a terrace above the Principessa di Piemonte Gardens. The beauty and tranquillity of Palazzo Sasso has inspired many 20th century personalities; the playwright Eduardo de Filippo who wrote ‘Saturday, Sunday, Monday’ on one of its terraces and General Eisenhower was a resident when he was planning the attack on Monte Cassino. Former celebrity guests Ingrid Bergman and Roberto Rossellini were fondly remembered as having giggled over dinner in the restaurant.

This era was sadly interrupted in 1978, when the Vuilleumier family gave up the Palazzo in favour of the Palazzo Confalone. The Palazzo was closed and ensued 19 years of abandon.